Coming closer to the projected date for the implementation of the Brexit, (March 29, 2019) the UK political stage is very agitated with diverging positions as to when, how and even if Brexit should be pursued. While some would prefer a new referendum to take place to re-consider the Brexit decision, others are asking for the re-negotiation of the Agreement with the EU and a possible transition period, or for a no deal Brexit.

At the end of 2018, the progress towards a consensual Brexit was encouraging. A timely, and orderly Brexit and Brexatom seemed within reach when the 28 EU members agreed on the Withdrawal Agreement and on the related Political Declaration at the Extraordinary Summit in Brussels, on November 25, 2018. However, these texts are to be approved by the EU 27 and the UK Parliament.

Despite the efforts of the Government to consistently promote the adoption of the Brexit deal in mid January , the debate in the UK Parliament resulted in a massive rejection of the texts as negotiated and a request to

negotiate a deal and to have the backstop provision (concerning the border between Ireland and northern Ireland) rejected. 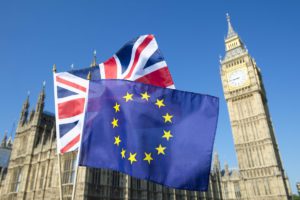 Confronted with a very strong “no renegotiation” stand from the Commission, Theresa May went back to Brussels, probably hoping to obtain some flexibility on the backstop issue over the Irish border, at least within the political Declaration.

Today it is still unclear wether a negotiated Brexit or a no deal Brexit will prevail, although it is also not impossible that Theresa May will obtain some more time, to avoid a no deal situation that is seen by many as the worse-case scenario.

How does this situation affect Brexatom?

As it was pointed out in our viewpoint dated March 2018, the exit from Euratom or BREXATOM is irreversibly linked with the exit from the EU.

Although there was an agreement on all articles related to Brexatom in the Withdrawal Agreement, if Brexit is implemented on the 29th of March without a deal, the same will go with the exit from Euratom; a no deal situation.

If, for the sake of simplification we disregard the possibility of a postponed Brexit, or of a reversal of the Brexit decision following a hypothetical new referendum, or a cancelation of article 50 by the EU, two situations may arise; 1/ Brexatom with an Implementation period, or 2/ a no deal Brexatom effective from March 29th, 2019.

A first point that needs to be looked at is where the UK government stands with the preparatory steps to BREXATOM.

A domestic safeguards regime has been devised, the Nuclear safeguards Bill received the Royal assent end of June 2018, the texts were open to public consultation from July to September 2018. They were successfully passed by both Houses of Parliament by 22 January 2019.

The regulation based on option 1 proposed by the government, provides for a system which will, domestically, offer a “coverage and effectiveness equivalent to Euratom”, going beyond the obligations resulting from the IAEA applicable requirements for a Nuclear Weapons State.

The safeguards regime is now ready to be implemented although some 14 inspectors are on training before being able to fully carry out their tasks.

Agreements with the IAEA have been finalised.

Bilateral agreements are being finalised.

The benefits of a withdrawal agreement

In this context it seems that in case of the “orderly” exit from the EEC and Euratom as planned, on 29th of March under a Withdrawal Agreement, the UK will be ready and the current Euratom safeguards regime will still be in place, giving time for the different UK regulations and international agreements to be implemented in a smooth manner. The Implementation Period will end on 31st December 2020 at 11PM, when the national provisions will supersede the Euratom regime.

A no deal situation

In addition to relevant arrangements being negotiated, the UK government did reflect on the different issues that may arise in the case of a “no deal” Brexit and Brexatom and did prepare a number of technical notices as guidance to the industry, operators or other concerned actors.

As far as the nuclear sector is concerned, two notices were published August 23, 2018. One notice deals with the research area,”Nuclear research if there’s no Brexit deal” and the other “Civil nuclear regulation if there is no Brexit deal” deals with the various Euratom regulations and examine how a no deal Brexatom would result for nuclear safeguards, ownership and movement of nuclear material, equipment and technology, management of spent fuel and radioactive waste, reporting and notifications to the European Commission.

The UK domestic safeguards regime will take over and allow the implementation of the safeguards agreements with the IAEA as well as the NCA with the US, Canada, Japan and Australia.

However, the situation with other customer or supplier countries may be more difficult and the export/ import regime from and into the EU will need to be reviewed. The concern here is that only WTO rules will be applicable with the EU, absent another deal.

The different provisions of the Euratom Treaty will no more be applicable except some provisions related to the rights of the Supply Agency. This will impose a new approval process from the Supply Agency for a number of contracts involving UK and EU 27, or those that had been previously co signed or those with expiration date beyond the withdrawal date.

From an industry or an operator standpoint, a Brexatom without a deal will be more complex and uncertain than with the negotiated terms of the agreement between EU 27 and the UK.

When Brexit was notified by T. May almost 2 years ago now, the situation seemed very challenging for the Government.

A month ahead of the planned implementation Day, the situation is still very uncertain, with a possibility that a delay is obtained to continue the negotiations with the EU 27.

However, with or without a deal, the UK nuclear community can be re-assured, the UK government successfully came to agreement with the main suppliers and partners and with the IAEA in a short period of time. A no deal situation will be operable vis-à-vis the main safeguards issue and the relationship with the historical suppliers, but a good agreement with the EU will still have to be negotiated to ensure a smooth relationship with EU 27.

In all cases, and as stated in paragraph 25 of the document “40 reasons to back the Brexit deal”, referred to above, a Brexit/Brexatom deal will be much preferable ensuring a predictable and more profitable relationship with EU27, in all nuclear fields including trade, R&D and supply aspects.